On a typical day, you might find men in prison uniforms planting seeds or watering plants at the new Second Chance Greenhouse at the Dick Conner Correctional Center in Hominy, Okla. The greenhouse is part of the TCC Corrections Education program where offenders, while in prison, can take college courses and earn certificates of achievement and/or an associate degree.

The TCC Corrections Education program, started in 2007, includes classes in computers, hotel and restaurant management and information technology. Horticulture was added in 2012. In its third year at Conner Correctional Center, 33 students have completed the Landscape Specialist Certificate and 30 of these students also received their state pest control license as part of a partnership with the state of Oklahoma.

“The college credentials the offenders have completed allow them to re-enter society equipped with the skills to become productive members of the workforce,” said TCC President and CEO Leigh B. Goodson, Ph.D. “The Corrections Education Program, like many other programs at Tulsa Community College, depends upon private funding for its special initiatives and projects.”

The Second Chance Greenhouse was made possible with private donations from Robert Spears, Richard Spears, John Spears, Jarl Johnson, Beverly Patterson, Carolyn Stees, and Jimbo Todd and the facility was built by the offenders. John Kahre, who oversaw TCC’s Horticulture program and retired after 33 years, coordinated with the offenders to build the greenhouse, design and construct a shade house, install an irrigation system, and plant a community garden for the prison. The offenders completed the community garden with supplies donated by Tulsa-area garden clubs.

One project already underway is the cultivation of several hundred tree saplings. In partnership with Up With Trees, the offenders will oversee the growing and replanting of roughly 200 saplings which will be given away each year by Up With Trees to support and strengthen Tulsa’s Urban Forrest.

Since its inception, 12 individuals have earned associate degrees and more than 345 certificates of achievement have been awarded to male and female offenders with some offenders earning more than one certificate. A study in July 2013 shows TCC graduates in the TCC Corrections Education Program succeed at a higher rate and are less likely to reoffend. The state average for recidivism is 20 percent as compared to five percent for individuals who participated in Second Chance once they were released from prison.

For more information about the TCC Corrections Education Program contact Jeff Horvath at (918) 595-8036.

PHOTO 1: Beverly Patterson and Robert Spears look around the new Second Chance Greenhouse at Dick Conner Correctional Center in Hominy, Okla. Patterson and Spears, along with five other donors, invested private dollars to build the new facility for the TCC Corrections Education program. 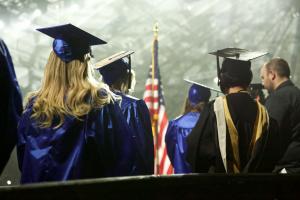