The trio own Tulsa’s first upscale drink café and offer nutrient-dense, plant based drinks made from fresh organic whole fruits and vegetables without added sugars, yogurts or ice cream. The entrepreneurs have sold thousands of drinks since opening their storefront 11 months ago. The superfood smoothie blends are their solution to our fast-food society and obesity problem.

Brett and Kristi Richison of FenceTrac Fence Systems finished second in the competition with a product that could revolutionize the fencing industry. FenceTrac is a maintenance free privacy fence using a U-Channel design that simplifies picket installation and creates a fence that resists warping. FenceTrac received $5,000.

Joel Vogt finished third in the 2014 competition and received $2,500. He is the creator of the Fuseman Safety Stick, a new patent-pending tool designed to safely remove and replace plug fuses in old style fuse panels. The Safety Stick is a three-in-one tool, with a built in flashlight to locate a blown fuse, a fuse puller to safely remove and replace a fuse and a storage caddy to store new fuses.

“The TCC StartUp Cup is about helping entrepreneurs get to the next step, accelerate the growth of new startups, and create jobs,” said Autumn Worten, 2014 TCC StartUp Cup chair. “Besides the prize money, the strength of this competition resides in the coaching and mentoring between the participants and Tulsa entrepreneurs.”

The TCC StartUp Cup is designed to support entrepreneurial growth, expand business and community connections, and maximize promotional opportunities both locally and nationally. The competition is supported by the Lobeck Taylor Family Foundation.

“The Lobeck Taylor Family Foundation, in partnership with TCC, can show this competition has had a significant economic impact creating 300 full-time jobs and 2,000 part-time or contract positions and adding more than $85.1 million to the Tulsa economy,” said Elizabeth Frame Ellison, Lobeck Taylor Family Foundation Executive Director. “We believe supporting entrepreneurship is the best way to grow jobs in Tulsa. That’s why we’ve decided to dedicate all of our foundation’s grants and resources exclusively to entrepreneurship for the next year. In June, we founded Cultivate918, an organization dedicated to growing Tulsa’s entrepreneurial ecosystem. Next year, expect many more exciting announcements about LTFF’s efforts to grow Tulsa’s entrepreneurial ecosystem.”

The 2014 Spirit of Innovation Award was awarded to Stephen Clayman of OP Left. Clayman is a former Marine who saw a need for map reading tools while serving in Afghanistan. Clayman founded OP Left, a veteran-owned company that makes specialty, precision-cut acrylic measurement tools for use on U.S. and NATO military maps not currently available in the field.

The Spirit of Innovation Award is a $2,000 prize given to a competitor that best exemplifies the spirit of an entrepreneur through innovation, the ability to adapt, passion and grit.

The 2014 competition saw a few changes from previous years including a streamlined competition timeline and a guaranteed spot in the finals for the fan favorite selected by online votes. In addition, the TCC StartUp Cup added a networking and coaching event open to all of the entrepreneurs who entered this year’s competition. The participants were given one-on-one time with established and successful entrepreneurs to ask questions and get advice with the goal to connect participants to other entrepreneurs.

For more information on the award, visit www.tccstartupcup.com. 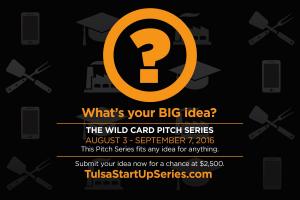 August 24, 2016 The Wild Card Series is a catch-all category for entrepreneurs and the fifth and final monthly...

January 22, 2016 The Tulsa StartUp Series named Remember the Member as the winner of the Tech/Apps Pitch Series held...

December 4, 2015 Tulsa’s original StartUp competition is evolving to meet the needs of local entrepreneurs as...
View all news