April 11, 2017
Tulsa Community College’s Theatre Department steps into the world of paranoia, schizophrenia and conspiracy theories with the upcoming production, “Bug.” Written by Tulsa-born playright Tracy Letts, this play explores the deeper, darker side of humanity with graphic and mature themes.

“Bug” is the final production in the 2016-2017 Tulsa Community College Theatre Department season. The performance is at the VanTrease Performing Arts Center for Education Main Theatre on the TCC Southeast Campus located at 10300 E. 81st Street.

The play is set in rural Oklahoma and shows how easily individuals can be persuaded by another person’s overpowering personality. The show is directed by Mark Frank.

“Everyone has some type of bug in their life that they are dealing with, some are real and some are in our imaginations,” Mark Frank, Assistant Professor and Coordinator of Theatre at TCC said. “This production is a great example of what happens when we are not confident in our own beliefs and convictions.”

Tickets for all theatre performances are $15 adults, $10 seniors, $6 students, and TCC faculty. Student rush tickets are available one hour before performance for $5. Tickets can be purchased at the VanTrease PACE ticket office on the TCC Southeast Campus. For more information call (918) 595-7777. 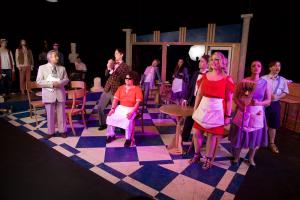