Tulsa Community College President Tom McKeon is named one of the Oklahomans of the Year for 2012. Oklahoma Magazine selected McKeon and four others for their work in building a stronger community and a better Oklahoma.

In recognizing McKeon, he was called ‘The Cultivator’ because his business is growing success one student at a time. He’s been associated with TCC for more than 30 years and has been president since 2004. Under his leadership, TCC started the groundbreaking Tulsa Achieves program that provides an affordable option for high school graduates who maintain a 2.0 grade point average and implemented the Achieving the Dream program to help students succeed and increase graduation rates.

McKeon has also been named one of the 2013 Icons for Oklahoma State University in Tulsa. McKeon was selected because of his leadership as a nationally recognized community college president and his contribution to OSU, the city of Tulsa and the state of Oklahoma. Other 2013 Icons for OSU in Tulsa are B. Frank Shaw, D.O., 2007 Oklahoma Osteopathic Association Doctor of the Year and a family practice physician in Muskogee, Okla.; Chris Benge, senior vice president of government affairs for the Tulsa Regional Chamber and former speaker of the Oklahoma House of Representatives; and Jim Halligan, Ph.D., former OSU president and current Oklahoma state senator.

The Current, an OSU-Tulsa newsletter, reports the 2013 Icons for OSU in Tulsa will be honored at "A Stately Affair" on May 20. Proceeds from the black-tie event at Southern Hills Country Club will fund scholarships for students who plan to attend the OSU Center for Health Sciences or OSU-Tulsa. 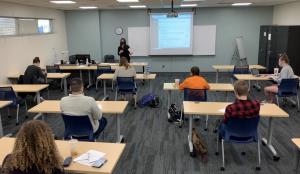 January 12, 2021 EDGE: Earn a Degree, Graduate Early is a pilot program launched under the name of Early College...
View all news