In FY16, TCC reduced utility costs per square foot from $1.53 to $1.39 with a savings of $238,614 from the year before despite the opening of two new sites with the Riverside Community Campus & Aviation Center at the Jenks Riverside Airport and Tulsa Fire Safety Training Center at Northeast Campus. In FY16, TCC’s EUI (Energy Use Intensity - KBtu/sf) changed from 109 in FY15 to 97.6 in FY16 with the College/University national average EUI of 130.7.

TCC has taken a comprehensive and strategic approach to reduce operation and energy costs with solutions ranging from switching out light fixtures to minimizing cleaning chemicals. The multi-year plan started with a review of TCC’s facilities and equipment and created a timeline to replace and update equipment resulting in maintenance costs savings as well as decreased operation and energy costs.

In addition, TCC was awarded the “Best Higher Education Project 2015” from Public Service Company of Oklahoma for work related to LED lighting upgrades at the Northeast Campus Parking Lot and the West Campus Liberal Arts building. This was part of TCC’s effort to replace 20,000 light fixtures across four campuses. The multi-year project with JCI produced additional results:

TCC has now completed phase 1 and phase 2 with JCI and continues to see operational and costs savings for the roughly 1.7 million square feet of space in TCC’s four main campuses and three community campuses. 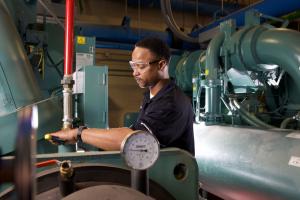 February 15, 2019 The theme for this year is partnerships in higher education as six colleges and universities share...