December 7, 2021
New York Times bestselling author and educator Scott Ellsworth returned to Tulsa after publishing his second book on the 1921 Tulsa Race Massacre and the aftermath.

Hosted by Tulsa Community College, Ellsworth discussed his work in a conversation with Kevin Clayton, TCC History Professor, at the Thomas K. McKeon Center for Creativity on Nov. 12.

“TCC believes it is important to continue the conversation surrounding our community’s history,” says Natalie Schuster, TCC faculty member who helped organize the event. “As a history professor in Tulsa, I find events like the talk with Ellsworth are invaluable. It leads to frank conversation and important dialogue in the classroom and gives students the tools to discuss and question their city’s history."

A Tulsa native, Ellsworth’s second book, “The Ground Breaking: An American City and Its Search for Justice” was released earlier in 2021. He previously wrote and published “Death in a Promised Land” in 1982, considered to be the first comprehensive history of the Tulsa Race Massacre.

“The story of the massacre has been buried for so long that, even now, 100 years later, Tulsa as a city is still coming to terms with it. Events such as this one at TCC are important because they get folks talking,” says Ellsworth.

Funded by the endowed Dr. T. Oscar Chappelle Lectureship and the Tulsa Community College Foundation, the event was free for students and members of the public to attend in-person or on a live stream. Organizers also recorded the event and it is available now for viewing with this link.

Prior to the public discussion, the Tulsa Community College Foundation hosted a private reception for TCC President’s Society members to meet Ellsworth. TCC President's Society members contribute at least $1,000 annually which allows the TCC Foundation to respond to strategic needs of the College and the President to direct additional resources to critical College programs and initiatives.

July 15, 2021 The TCC Foundation is providing $10,000 for textbook vouchers for students selected for the first... 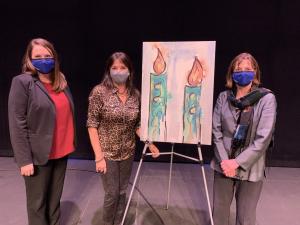