With Black History Month just around the corner, we are reminded that equality in education has come a long way... but there is still much work to be done! Students of many different racial, ethnic, and socioeconomic backgrounds often face unique barriers to completing their college education. Many of them are first-generation college students or non-traditional students trying to navigate the world of higher education for the first time. 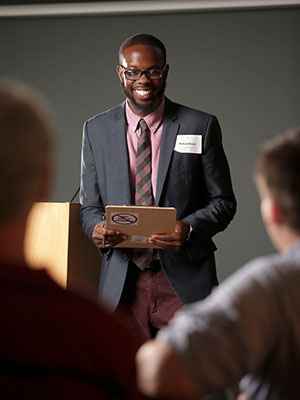 The issue of equality in education is complex, but TCC's research has identified several relatively simple steps that can make a big difference. For instance, a $200 fee might not seem like much to some students, but to others, it’s the difference between earning a degree and dropping out.

Today we're celebrating progress in The Campaign for Completion's sub-goal for Diversity and Inclusion Outreach. Already, new grants have been put in place to support students in need of a leg up. Retention specialists reviewed and reached out to students who were poised for success, but at risk of dropping out. These students all:

"The Campaign is directly addressing the obstacles that derail our students from finishing their degrees… It's going to make a real difference for their education and their ambitions."
Provost Eunice Tarver, Assistant Vice President for Diversity & Inclusion

Sarah Carr serves as one of the TCC retention specialists, and she shared just how much effort went into selecting the grant recipients and allocating the funds responsibly: “There were at least six different phone calls and personal meetings with each applicant … we wanted to have a holistic look at each student to truly understand what their needs were. We also have a strong partnership with academic advising.”

Initially, there was often shock and disbelief when TCC’s retention specialists reached out to the students on their list. “I got the sense that this one was of the few or only experiences where they were being given that kind of help and were specifically sought out for help,” said Carr. “In the end, it was an emotional experience at times … the appreciation and gratitude were just through the roof.”

"I had a hold on my account and couldn’t register … The grant was a blessing to me. It’s been a long road. I graduate in May. Because of this grant, we’re able to be here today.”
Rosanna Vigueras, TCC Class of 2019

The financial hold may have been their official reason for dropping out, but after digging deeper, the grant applicants often shared that the fees were just a small part of the big-picture challenges to completing their education — the straw that threatened to break the camel’s back.

Thanks to the generosity of The Campaign donors, a Completion Grant was awarded to eight students last fall, and all eight of these students are now on track to graduate in May! Another 13 students were awarded a separate Retention Grant designed for students facing similar small financial barriers earlier in their education.

"The grant enabled me to finish my goal ... I’ll be the first one in my family to graduate from college."
Sheila Riley, TCC Class of 2019

“This support has been the difference between students dropping out and students directly going out into our community,” shared Provost Eunice Tarver, who serves as the Assistant Vice President for Diversity and Inclusion. “This spring, for example, one of our students is graduating and is then going out to become a paramedic … Our donor’s gifts have not just been an investment in our students, but also an investment in our community.”

“Words are just not enough to say thank you,” said Retention Specialist Carr, “It’s not just about money. I feel like [these gifts] are also restoring faith in the human capacity to help one another … you don’t always understand what some students go through just to get to class.”

This January, several of the Completion Grant recipients attended the TCC Board of Regents meeting to share their personal stories of student success.

July 15, 2021 The TCC Foundation is providing $10,000 for textbook vouchers for students selected for the first...
View all news